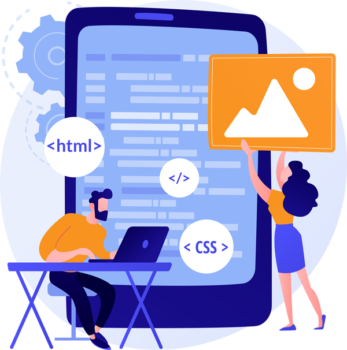 App development in Nepal is the process of developing an application that runs on mobile devices like Android, Tablets, and iOS. Since the beginning of mobile platforms, people are highly attracted to cell phones. Online marketers and businesses can take considerable benefits from this trend. Some mobile applications come pre-installed with the devices whereas some users install themselves. Large companies like Apple and Google provide a store for their applications like Google Play Store and Apple Store for downloading apps.

Mobile App Development started taking its market since the first introduction of Android Smart Phones in late 2008. People were unaware of any such mobile application and development processes till 2010. But since the craze of smartphones took place, people started considering application development for their business. And why shouldn’t they? Technology never stops defining what people can do with the use of cell phones. By the end of 2022, the total number of mobile users will be nearly four billion, which means you will be missing all these users if your business lacks a mobile application.

Mobile app development is not an easy task. Most app development companies are lacking several factors during their development processes, including app performance, bug fixes, and updates. Ensuring clients with a fantastic user experience and serving them the most advanced mobile applications is what most software companies are concerned about. As the use of mobile phones keeps growing, the demand for mobile apps is increasing. We, at Podamibe Nepal, develop an innovative and useful mobile application that will lead your business to success.

Types of app development in Nepal

We develop a native application specifically for either the iPhone/iPad or Android devices. For native iOS development, we use the Software Development Kit (SDK) offered by Apple. Google has developed its own Android Software Development Kit that enables us to create amazing Android applications. If we develop a Native app for Android, it won’t work in iOS and vice-versa. Programming languages used for the development of native applications include Objective-C and Swift for iOS, Java, and ADT for Android and .NET (C#) for windows.

These applications need to be updated according to the device version in order to make them compatible. Incompatibility issues might lead to an application crash. The official distributors of these applications are Apple iTunes, Google Play Store, Windows App Store, and Amazon App Store.

These applications are simply web pages that run on mobile devices. These pages run on different web browsers and mobile operating systems. However, a page needs to be mobile-friendly for viewing on Android, iOS, or Windows devices. The languages used in these applications are HTML, CSS, JavaScript, jQuery, etc., and can be easily accessed via PC web browsers. However, the application gives the best performance in PC browsers whereas an average performance in mobile browsers.

Note: These applications are distributed freely on the web.

Why you should invest in mobile app development in Nepal?

According to research, there are more than 38.21 million mobile users in Nepal and now, everyone uses mobile apps for search, online shopping and services. Mobile apps help stay connected with potential users and attract new users. Here are some of the reasons for your business to invest in mobile app development in Nepal.

Studies suggest that mobile app will provide an edge over competitors. Having mobile app helps connect with user quickly and facilitate them.

Sending notifications via app is cheaper and falls under direct marketing. Announcement of event or launch of new product is much easier and target direct audience.

What is the best solution for mobile app development?

The advantage of a hybrid mobile application is that it can be developed only once for both mobile platforms. It saves time and money. But a native application often has a better user interface because it is explicitly developed for one system. It is more compatible and reduces the chances of failing some parts of the application.

During mobile app development, one needs to know what they want; otherwise, the application might be nothing but useless. Frameworks that help to build high-end hybrid applications are Xamarin, PhoneGap or Titanium.

Why Podamibe for Mobile application development company in Nepal?

Almost 90% of internet users use a mobile phone to access the internet. Why not take advantage of this with an amazing mobile application? Developing a mobile app according to a business need is more important. Any mobile application can do tasks, but will it sell what matters the most? Working with professionals can only get what you want. We, at Podamibe, are one of the best Mobile app development service providers in Nepal.

We ensure you world-class mobile apps by using advanced technologies in an optimal way.

We understand the intent of mobile apps for your business and help to build resilient, thoughtful & user-friendly mobile solutions.

How much does Mobile App development in Nepal cost?

There’s no particular answer to this question as the cost of creating an app depends on several factors, and can cost anything from Rs. 50,000 to Rs. 5,00,000. The cost will vary depending on factors like: Project size, technical complexity.

At Podamibe, we leverage our 7+ years of expertise to design visually appealing iOS apps that deliver a seamless performance on the end devices.

Our iOS app development solutions help business draw user’s attention and turn one-time customers into loyal clients. iOS or iPhone OS development is the process of creating an application that runs on an iOS device. An iOS device may be either MacBook, iPhone, or iPod. iOS is completely created and maintained by Apple Inc. and is known for its world-class security. iOS is the second most used mobile OS after Android. iOS apps are written in C, C++, Objective-C, or Swift. Apple releases a major version of iOS every year. The latest version of iOS was released on 19 September 2019 and is named iOS 13.

How much does it cost to hire an iOS app development in Nepal?

The cost to develop an iOS application varies for each business perspective and mainly depends on factors such as API integration, complexity etc. Since app development don’t follow the one-size-fits all approach so iOS development in Nepal can be costly.

Android is the most popular operating system in mobile, with more than 3 billion active devices in world. With billions of active users, launching an Android app will help expand business and target a wider audience. Developing an Android application will also give you a competitive edge in the market and gives you the opportunity to reach your global audience with minimum hassle.

Android development is a process of creating applications that run on android operating systems like “Android Donut,” “Android Marshmello,” “Android Oreo,” and the latest Android 9.0 “Pie.” Android apps often need an upgrade with an OS version to make the system compatible. Android applications use the Android Software Development Kit (SDK) released in 2009 along with various languages like Java, C++, Kotlin, JavaScript, etc. Some of these languages also support cross-platform.

Mobile App Development is not enough always. An application should be compatible with all devices of its category. For this app, system testing strategies need to be carried out. Mobile apps are tested using emulators during the development. Emulators are inexpensive and can be used by developers to test applications on mobiles even if they do not have their physical access. We simulate field testing after the successful development of an app.

Some of the most popular emulators used in mobile testing applications are:

It is an Android emulator that runs on Windows PC and doesn’t need a complete Android SDK. It is easy to install and test android apps in Google Android Emulator.

Officially released by Android, it consists of a full impression of the hardware and software features of a mobile device.

Powered by Safari, iPhoney gives a pixel-accurate browsing environment. Rather than a simulator, it is a tool used in the development of websites for an iPhone. iPhoney only runs on OS 10.4.7 or later.

MobiOne is an IDE (Integrated Development Environment) developed for windows that help developers to code, debug, test and deploy mobile applications on different devices such as iPhone, Android, Blackberry, etc. MobiOne was declared the end of life by the end of 2014, but still, many alternatives to it are found.

After successful completion of mobile app development, what we seek is ASO.

ASO (App Store Optimization) is just like SEO (Search Engine Optimization), which is used to increase rank of websites. But, with ASO, we can get more downloads, better application reviews, and rankings. More the ASO, the better the chances of getting your application across the world. You can also say it is like marketing of mobile application or Mobile App SEO to get more downloads and reach out in the globe. According to Statistics, almost 300 billion apps were downloaded in 2018, and this number is growing every day.

ASO (App Store Optimization) techniques are not much different than SEO. Some of the traditional SEO tactics are even applicable in ASO for optimizing mobile applications. The most common and essential ASO techniques that will get your application more visibility areas are: